The LNUR loading gauge (v1) defines the maximum height and width our locomotives and rolling stock can be built at to ensure compatibility with our display layouts.

The loading gauge standard is defined by 3 key rules: 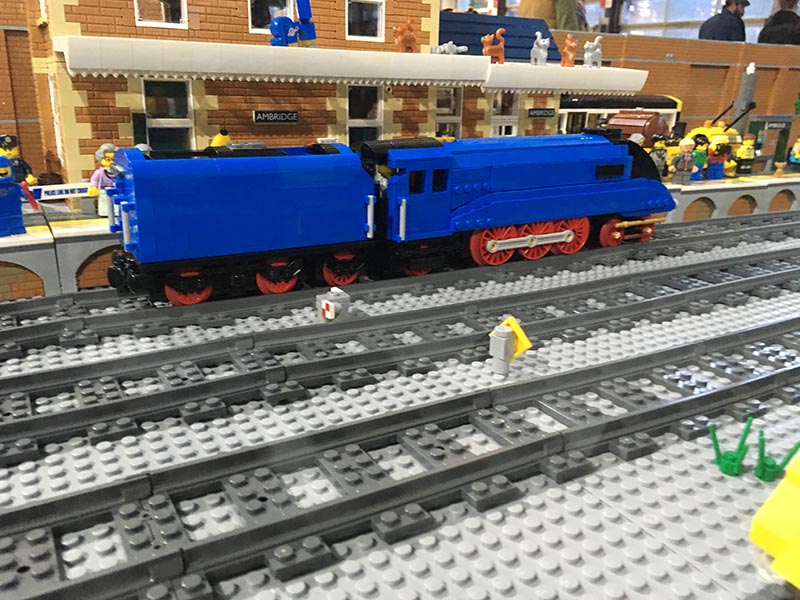 LNUR LEGO railway loading gauge in action: here you can see 1 stud clearance from the track edge (2 studs from the railhead) to the platform edging, as well as that distance being upheld with the signage in between tracks, and even scenery items (the plant stalks on the right).

Implications for infrastructure and scenery building

We expect all mainline infrastructure such as station platforms, bridge supports, and tunnels used on LNUR displays to accommodate all vehicles on the lines to these standards.

Don’t worry – it can take some practice to get it right, and even long term members get this wrong occassionally – it’s just trial and error and a lot of patience!

This loading gauge standard is still in use on LNUR displays.

There are no current plans to rewrite or update this standard, though individual member layouts may still use their own loading gauges. This is primarily due to many of our members’ locomotives and rolling stock being constructed to accommodate this loading gauge.

All LNUR LEGO railways confirm to this standard, except Glasgow Brick Subway which has much tighter clearances based on the prototype itself. Compliant displays are: